I have had many unfortunate incidents with individuals who lack the maturity required to deal with rejection, and I have to say I have been shocked and pushed to my wits’ end by their reactions. 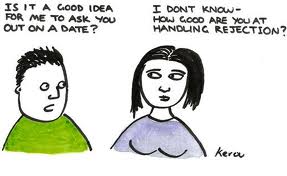 Rejection is an unfortunate part of life, and I have had to deal with it in many spheres of life. However in relationships, it seems the bite of rejection stings worse than any other kind of rejection. I have had very shocking experiences where I turned down advances from men and their reactions left me dumbfounded. One such experiences was when I told an older man who patronized my editing business that I was not interested in him. After I’d completed his editing order, I sent him an invoice, he paid and as far as I was concerned, our business together was over. This man kept sending me messages afterwards to greet me, and I always responded as politely as I could. After a while, he started sending me messages that suggested he wanted to date me, so in a polite text, I told him I was not interested. That was my greatest undoing.

He sent me all the nasty words in the dictionary that he could find, and at the peak of his anger, ended his message with “fuke you”. Clearly, he meant to use the ‘f’ word, and his spelling error lightened his previous words so I laughed as hard as I could. I could not understand why he was so hurt, it’s not like we were in a relationship, but clearly he thought we were. I ignored him completely and went about my day as usual. I did not have time to encourage the actions and tantrums of a 44 year old man who was acting like my son. After a couple of days of hateful and spiteful texts without any responses from me, the messages stopped and peace was restored to my cell phone.

So how should people deal with rejection? here are a few pointers:

Rejection is not an easy pill to swallow and definitely no one is perfect. We all have room to improve ourselves and we should always aim to do so. Rejection should not be followed by insults and swear words. It should be respected as another individual’s decision and treated accordingly.